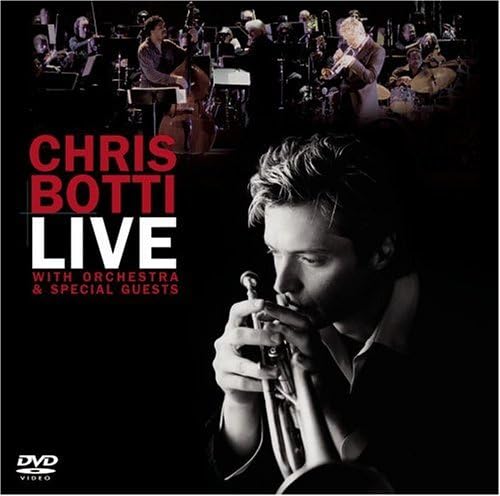 Jazz trumpeter Chris Botti is mostly exquisite on this concert DVD, which gives old fans and new arrivals a chance to hear him apply his rich, expressive playing to a number of old standards, as well as one or two of his own compositions. Botti, along with a remarkable band including Billy Childs on piano and Billy Kilson on drums, plays six numbers as instrumentals but is joined on eight other performances by a few guests. Sans vocals, Botti warms up a delighted audience with a nice, if slightly exercised, take on "Someone to Watch Over Me," but proves magnificent on "When I Fall In Love" and especially Leonard Cohen's "A Thousand Kisses Deep." Then out glides old pal Sting (who invited Botti to join his own touring band some years ago), who has a nice go at "What Are You Doing the Rest of Your Life?", followed by jazz-blues belter Jill Scott's terrific "Good Morning Heartache." Less effective are two appearances by Paula Cole, of which the second, "The Look of Love," doesn't work particularly well for anyone, including Botti and composer-pianist Burt Bacharach (also onstage). Renee Olstead sizzles up the joint with her kittenish "Pennies from Heaven," and Sting returns for a comic if touching "My Funny Valentine." --Tom Keogh

December 2005. Los Angeles, California. Trumpeter Chris Botti, on the heels of his break-through gold certified album "When I Fall In Love," and the record-breaking follow-up, "To Love Again," plays two triumphant shows at the Wilshire Theatre backed by a full orchestra and his virtuosic band. Playing repertoire mostly culled from these two hit albums, Chris is joined onstage by some of the world痴 most accomplished singers and musicians (in order of appearance): Sting, Jill Scott, Paula Cole, Burt Bacharach, Renee Olstead, Paul Buchanan, and Gladys Knight. The show is filmed for the PBS special, "Chris Botti Live with orchestra amp; special guests�and this DVD.

"A passionate evening of instrumental storytelling�it was apparent from the first notes Chris Botti played at the Wilshire Theatre on Friday, that the sold-out house was in for a special evening." -Don Heckman, Los Angeles Times

Almost one full hour of bonus features� with backstage footage and exclusive interviews.